You are here: Home / Fitzroy Titles / The Secrets of “Spartacus Ryan Zander and the Secrets of the Incredible”!

Spartacus Ryan Zander and the Secrets of the Incredible
Spartacus’s human cannonball mom was kidnapped. It’ll take a road trip, a sideshow, goths, some dangerous old ladies, and a lemur to save her. Funny and adventurous with some dark themes. Ages 8-13. 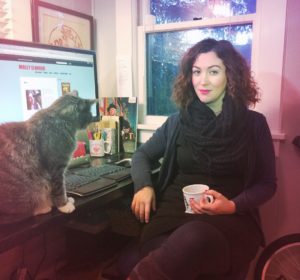 When I was a college freshman, I wrote a short story of two small-town brothers—one the bully and the other his prey. The older one was always finding the younger’s weaknesses and exploiting them, while their machismo father egged the older brother on. It was a simple story with a comic punch line.

My writers’ workshop? They hated it. They said it wasn’t “realistic.” What brother could be that cruel? How could a father be so nonchalant? And where is the mom?

This short story was the seed of Spartacus Ryan Zander and the Secrets of the Incredible. I was confident about this dynamic family relationship I’d created—mostly because it was very similar to the one I grew up in. It takes all types to make a family, and it takes a special, resilient kid—and a lot of humor—to navigate the emotionally difficult waters of a uniquely broken family.

NOT JUST A CIRCUS BOOK

Family, relationships, and finding your people

Sure, there’s a circus and a sideshow in this book. There’s also an adventurous road trip and a crime ring. But all that? It’s just the backdrop. When you get down to it, this is a book about family and relationships and coming of age. There’s no magic, there’s no exaggeration (hyperbole though? Most definitely).

Spartacus starts out in a tiny town where his reputation is staked on how his bully brother presents him—and the rest of his family isn’t exactly helping him out. Spartacus is isolated. (And personally, I grew up in a town of 900 people. I know how it feels as to be a kid in a small town. How can you even dare to dream of growing into a strong oak tree when you start out in a pot the size of a thimble?)

So I pushed Spart out into the world. He meets a slew of larger-than-life characters, many who quickly become like family, giving him the respect and camaraderie he never knew to expect from home. It’s on the road that he discovers new points of view, finds a sense of belonging, and finally spreads his wings. And while he must return to the town—after all, he is only twelve—he comes home with the tools and bravery to own his own narrative. 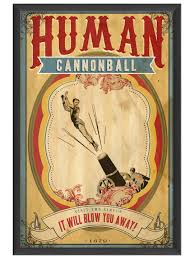 In order to talk about the circus, I have to first talk about the mom, Athena. I’ll admit it: the human cannonball mother (and entire circus theme) came from the Natalie Merchant’s song, Ophelia, specifically these lines:

Ophelia was a tempest, cyclone // A god damned hurricane…

Athena has an epic storyline—she has an accident, abandons her family to follow her circus dreams, and ends up possibly maybe perhaps (no spoilers!) doing even more nefarious activities.

Sure, it’s fun to have a cool mom. But the truth of the second line above cuts deep: A cyclone mom? Yeah, that’s not a mom who can be trusted. She’s someone who runs hot and cold, who is both loving and unreachable, who leaves destruction behind. I spent a good amount of time imagining how her behavior would impact a vulnerable, sensitive child like Spartacus (spoiler: it’s not good). Her arc is the most surprising and becomes Spartacus’s most important lesson.

BUT YES, IT IS A CIRCUS BOOK 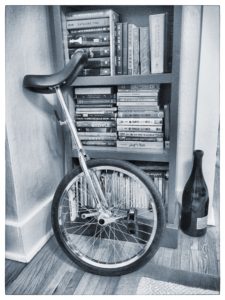 My favorite part about writing this book was researching circuses and sideshows. I loved teasing out that info across hundreds of pages, leading up to the reveal of Bartholomew’s Circus of the Incredible. I explored books and blogs, watched a lot of circus movies, and granted myself permission to see Cirque de Soliel every time they came to town.

I also learned the jargon and read up on sideshow acts and carnie life. For example, did you know that the human cannonball is actually just a catapult? Or that people are actually swallowing swords? Or that the fire breathing is—actually, I don’t want to share what it is, as it sounds both easy and way too dangerous to try at home. Also, the name Robin Marx is a carnie joke. Confession: I bought a unicycle that I haven’t learned to ride. But soon!*

The not so fun

I’m a massive animal lover. I don’t eat them. I do animal rights activism. I am trying to befriend the crows in my neighborhood. But also, another confession: I’d included circus animals in every early draft of this story until I personally became aware of the cruelty. When I realized it, I was stumped. I mean, I wanted to create an authentic circus but… can I also drive home, “Animals aren’t entertainment!” without making that take over the book?

Balancing this tight rope wasn’t easy. In the end, I decided that Bartholomew’s Circus of the Incredible would have animals (Bartholomew is a bad dude, after all). Then I allowed the characters to voice their opinions on it. Spartacus discovers the Bart’s history of animal cruelty. Calyxtus, the socially-aware goth, speaks up against the mindlessness of animal entertainment. Zeda, a fire-breathing girl from the sideshow (and Spart’s love interest), pours her heart into—and coaxes Spart into—saving an endangered aye-aye from a life spent in a cage.

But even with all this, I’ll admit it: I am still torn about the circus theme. Will kids get the message? Or will they ask their parents to take them to a circus and end up at one with elephants and bears, therefore increase the demand for animal acts? To reach more people, I’ve added a link to my website to raise awareness of the cruelty of animal entertainment. I also plan to create small “did you know?” table talkers or fliers at speaking events. (You see how torn I am? I’m writing about it in my first in-depth blog post about my book. Ugh.)

I don’t know where I first learned about aye-ayes, but this endangered lemur with the shocking looks won me over. Native to Madagascar, aye-ayes are swiftly losing habitat and are routinely killed for superstitious reasons. I realized aye-ayes needed more of a spotlight, so I wrote Matilda the aye-aye into the story. I love that it gives readers an individual circus animal to sympathize with—plus it meant I got to watch a bunch of lemur and aye-aye videos. (I even found a non-profit lemur center where I saw aye-ayes in person.)

For all these reasons, I’ve decided to donate my portion of the books’ August and September proceeds to a non-profit dedicated to the protection of and public education about endangered lemurs. I’m also holding a raffle at my book launch. The goal is to raise $50 for this non-profit; the raffle winner gets to symbolically adopt an aye-aye. I’ve also created a Matilda Adoption Package (my book plus $60 aye-aye adoption) on my website.

OKAY, LET’S WRAP IT UP

Obviously, it sounds like there’s a lot going on in a book written for middle grade readers. But when you get down to it, as a kid, I was disappointed at how simplistic a lot of books were—and how short they were. I loved finding themes and lessons and hated being underestimated. On the surface, Spartacus and the Secrets of the Incredible is a road trip with a circus as the destination, and a crime thriller thrown in to spice it up. But like any good sideshow, there’s a lot more than meets the aye-aye.

And no, I will not apologize for that pun.

Molly Elwood lives in Portland, Oregon. She works as a copywriter/creative mind and spends her free time watching bad movies, reading good books, and scheming ways to get on a plane to anywhere. She is currently obsessed with the multiple worlds theory and how it affects cat behavior. She recently discovered this mysterious site: https://www.ihatebartholomewscircus.com/