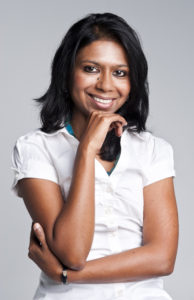 Roopa is a dreamer. Ever since she could remember she has been dreaming and imagining stories, conversations, and characters.

Born in Kerala, India, and raised in Mumbai, Roopa’s earliest memory, at five years of age, is of leaving cups of cream for the elves and pixies that lived underneath her bed—her favorite book of the time being Enid Blyton’s Book of Fairies! She would sit up in her bed at night, waiting for hours to catch a glimpse of these mysterious visitors.

Roopa’s love for reading was kindled by her grandfather’s library, where she passed countless hours poring over musty smelling, dog-eared books. From there, Roopa pursued a MA in English Literature and a postgraduate diploma in Journalism. A stint at several newspaper publications like Times of India, Mid-day Metro and Asian Age and a publishing house, Taylor & Francis Group followed.

Roopa particularly recalls (with a mixture of horror and amusement) her early days as a local tabloid reporter where she interviewed everyone from local bravehearts to sulking beauty queens. Her most unforgettable story was of interviewing a gentleman whose “talent” involved keeping a live frog and cockroach in his mouth for ten seconds—a feat captured live by Roopa, and reported in detail for her local tabloid, which was later picked up, translated and shared by other regional tabloids and also became a point of conversation on Dave Barry’s blog. These, and many other interesting reporting experiences turned out to be great raw material for her writing.

Later, Roopa took a quantum leap and moved to the United Arab Emirates to be with her husband, where for a brief period, she moonlighted as a recruitment consultant by day and a freelance writer by night. Some of her short stories have found a home in journals like Corium, From the Depths, Page & Spine and other Indian anthologies.

Now, Roopa lives in Dubai with her little cherub, Nanda, and her husband, Shankar, with whom she runs a content development studio. When she is not chasing after her daughter or scrambling to meet project deadlines, this self-confessed Sylvia Plath addict loves staring into space, tuning into Netflix, and dabbling in tarot card reading ( not necessarily in that order).

Roopa believes that she has some stories that she would like to tell. And some of them, perhaps, she is the only one who can tell them.

Regal House Publishing and Fitzroy Books are delighted to be publishing Roopa Raveendran Menon’s work of Middle-Grade fiction, The Adventures of Chandu and the Super Set of Parents, in 2019.